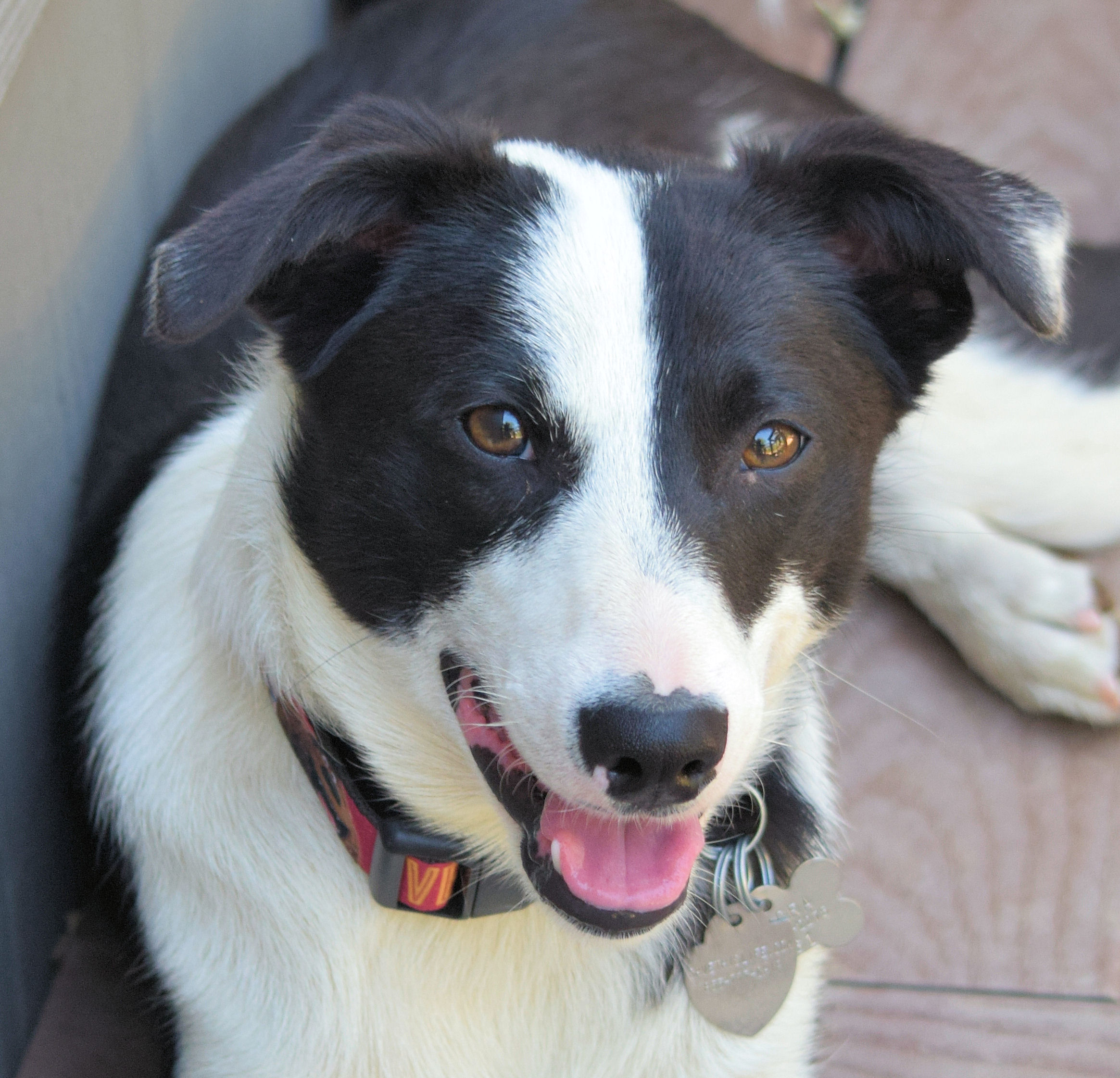 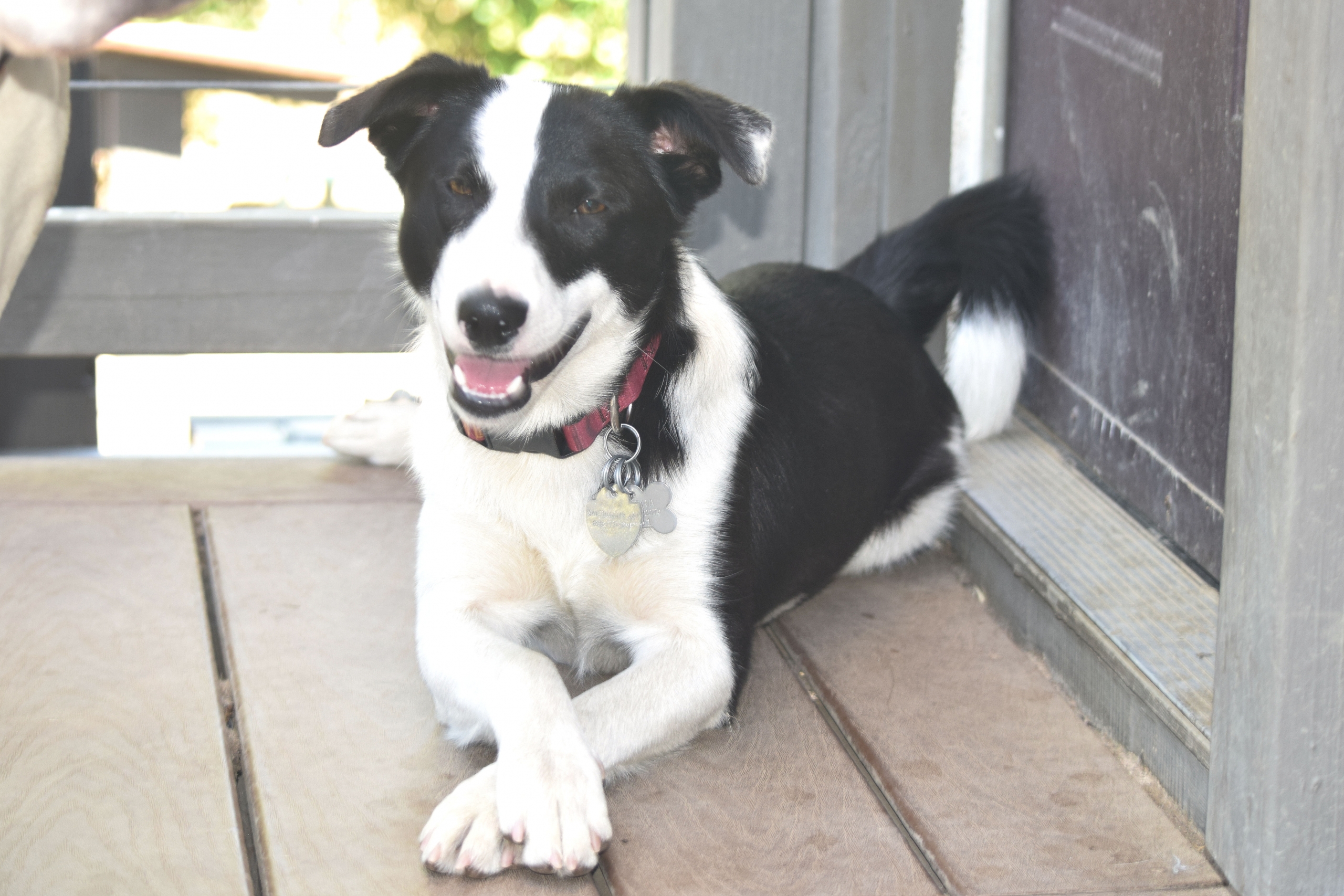 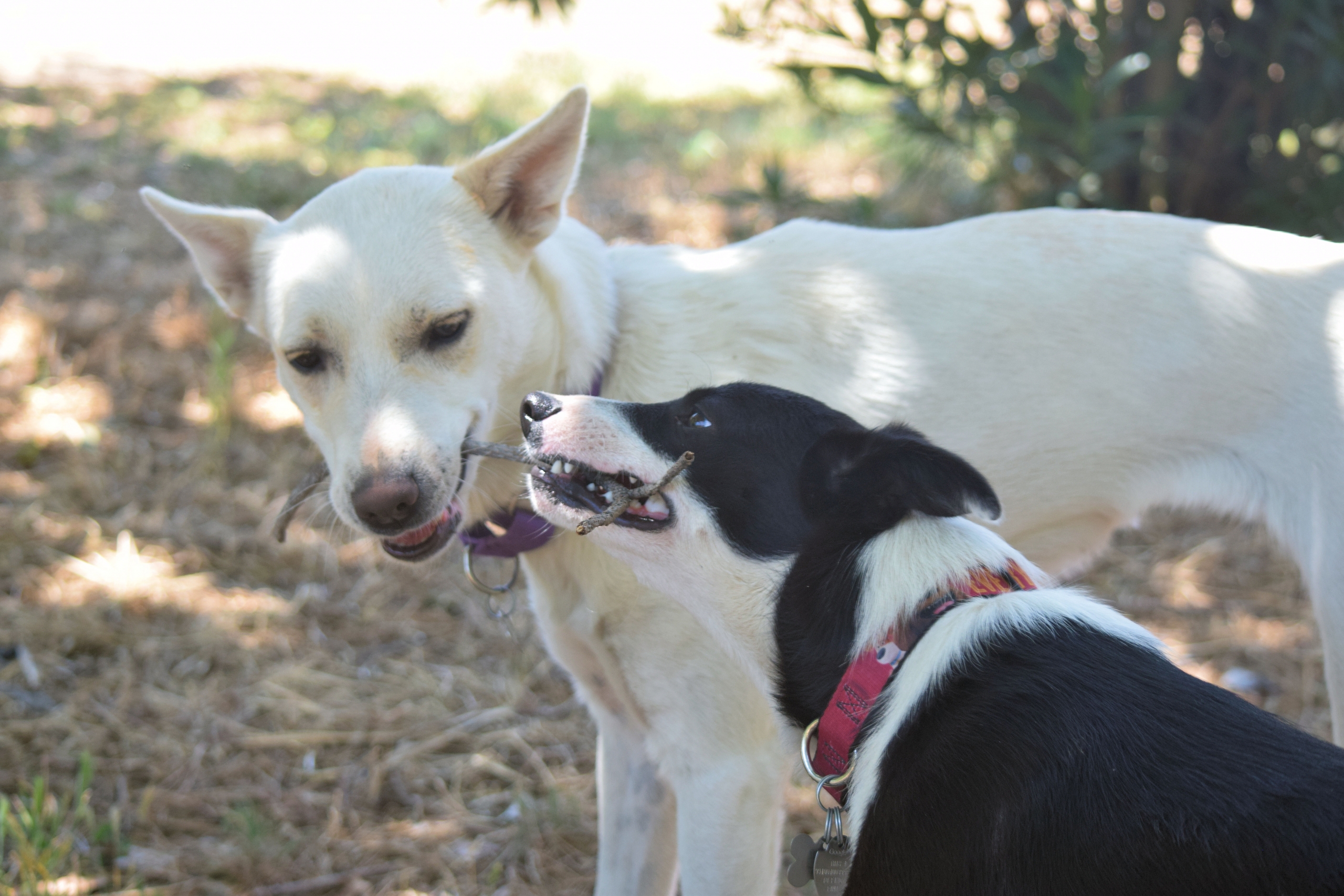 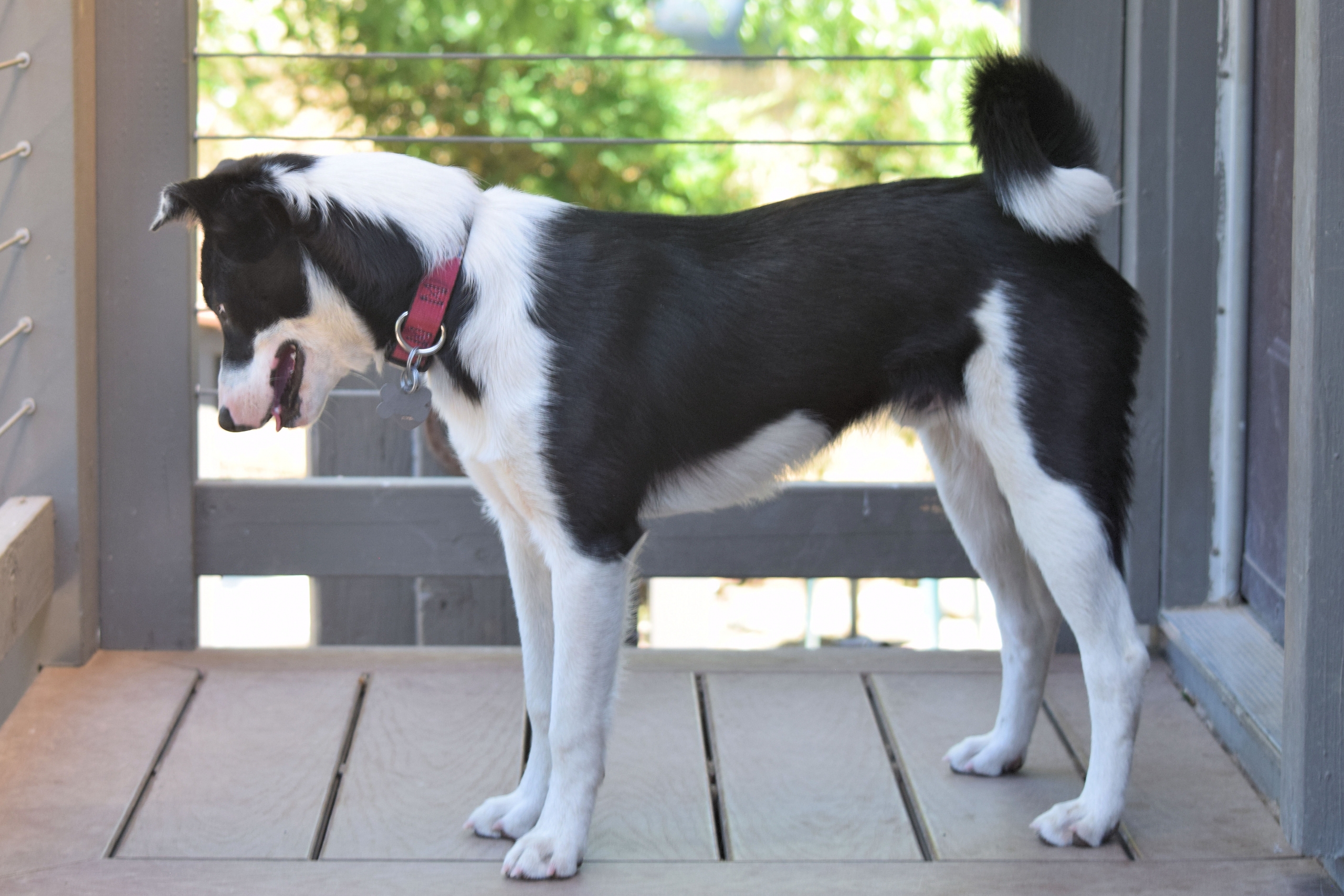 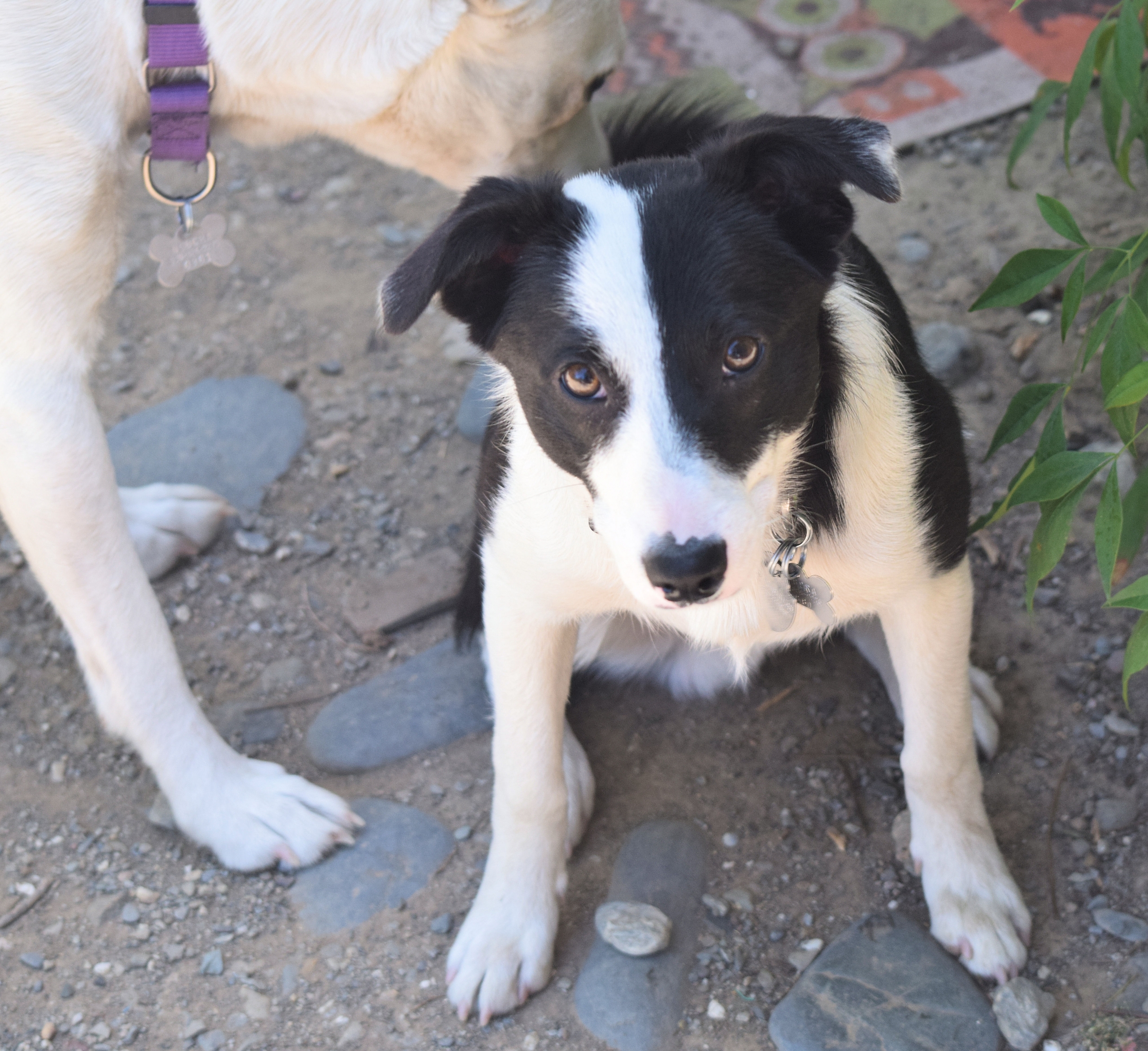 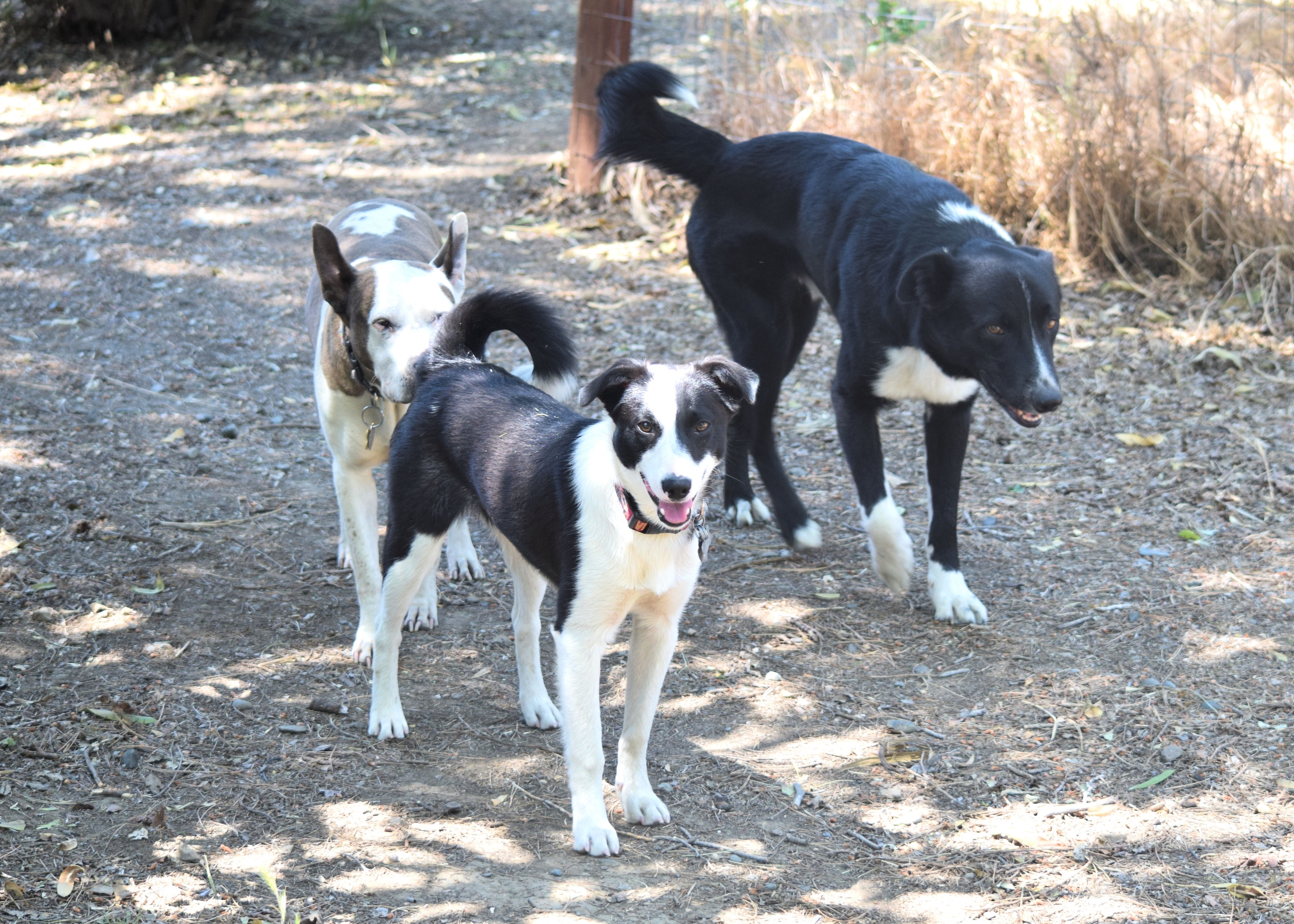 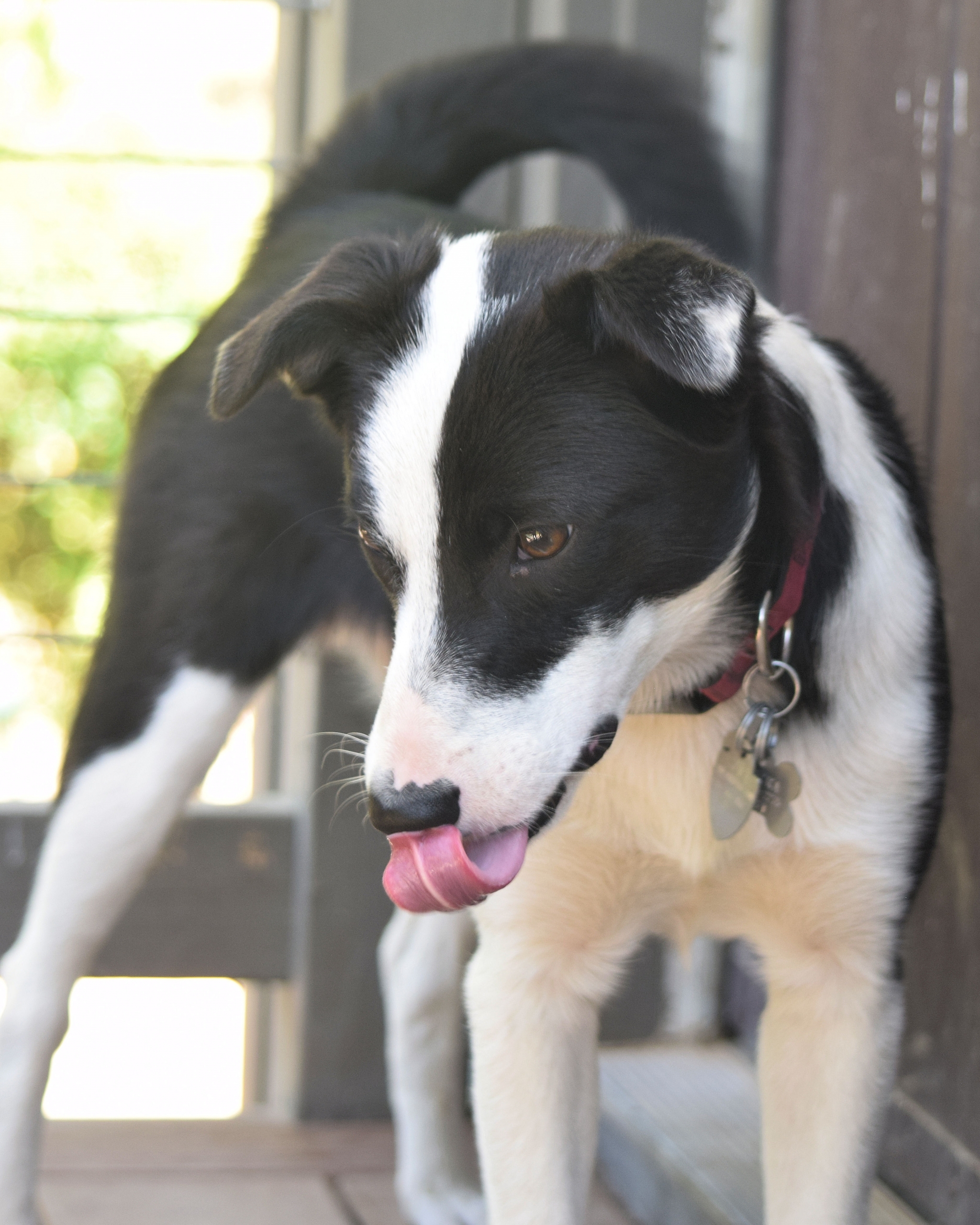 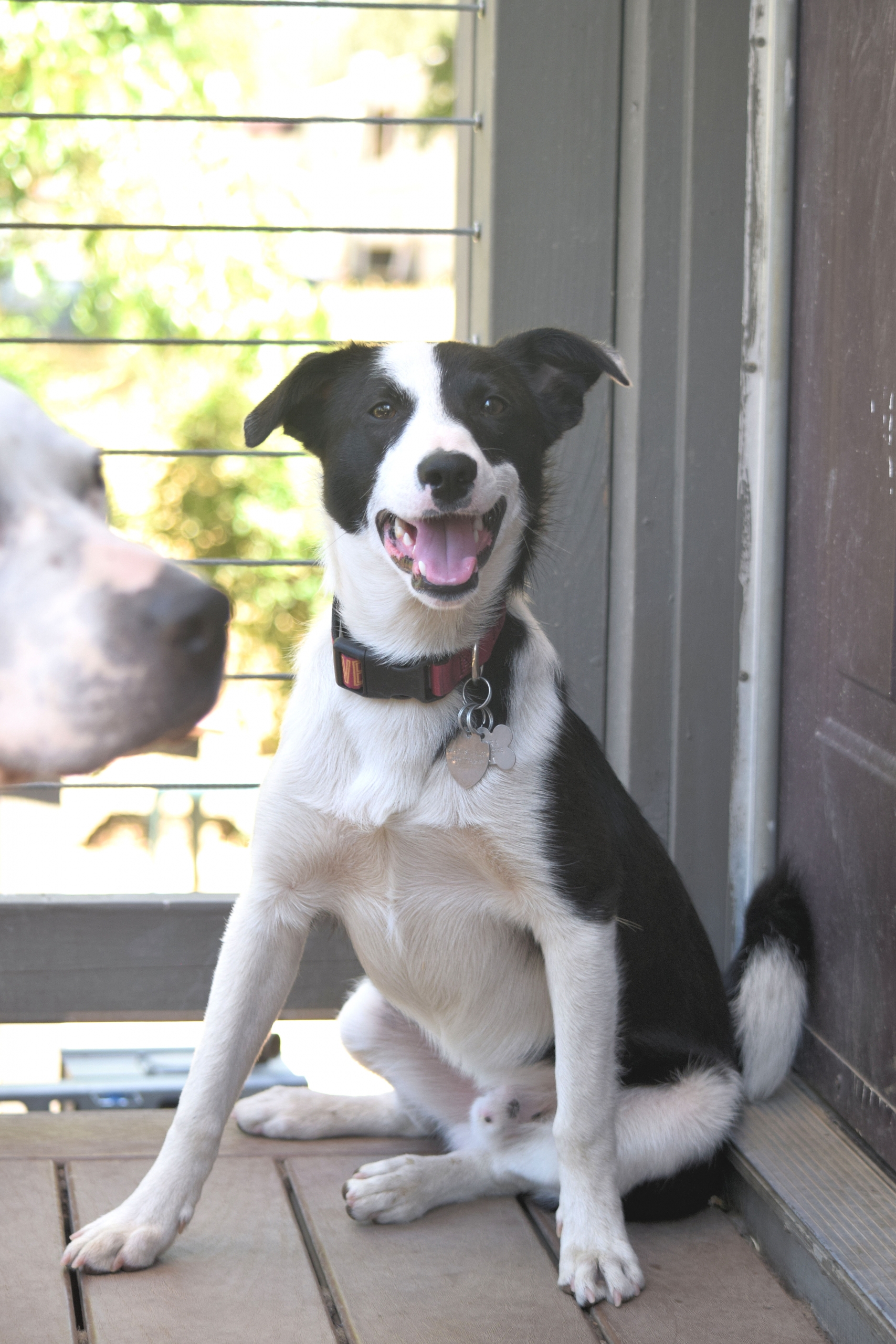 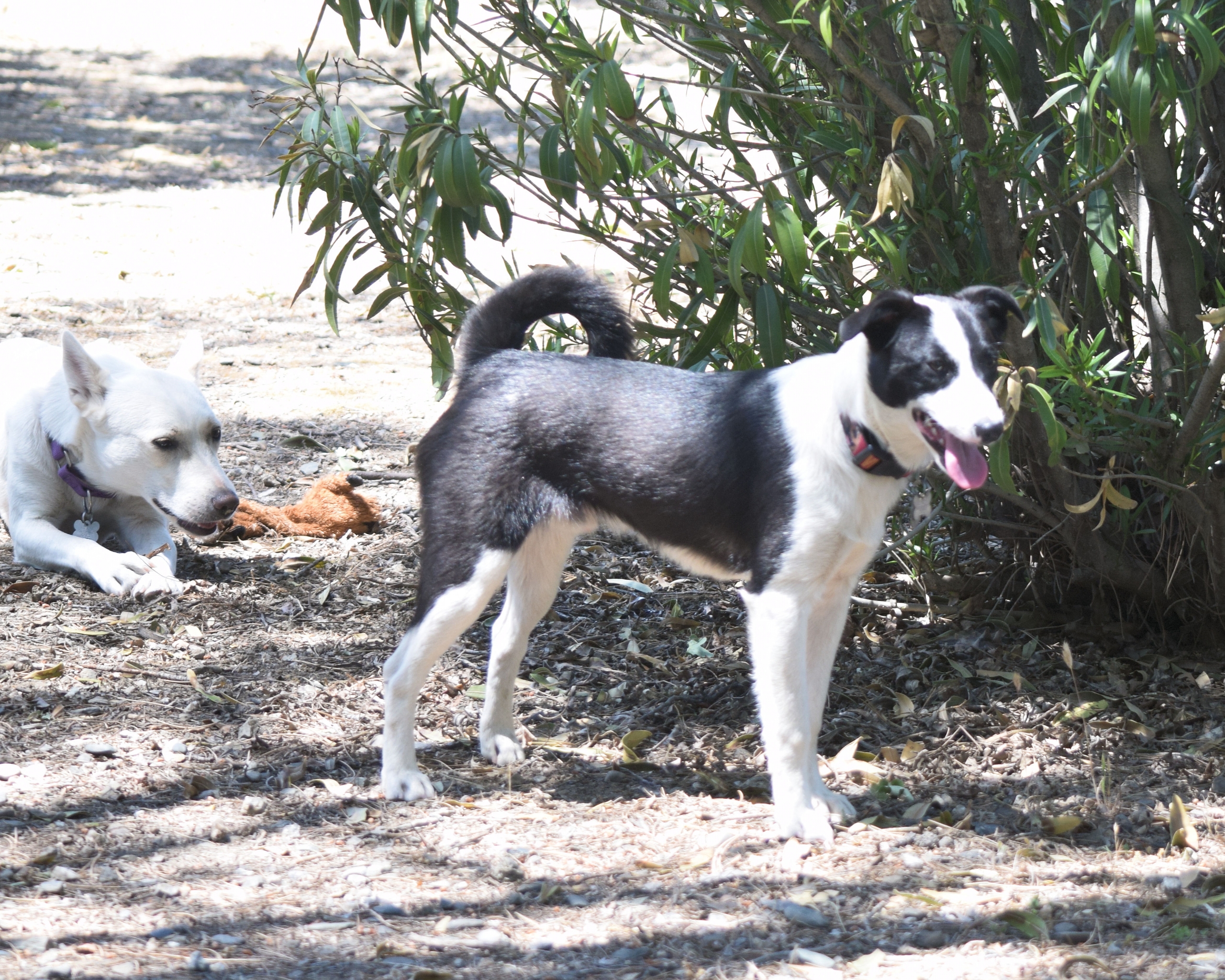 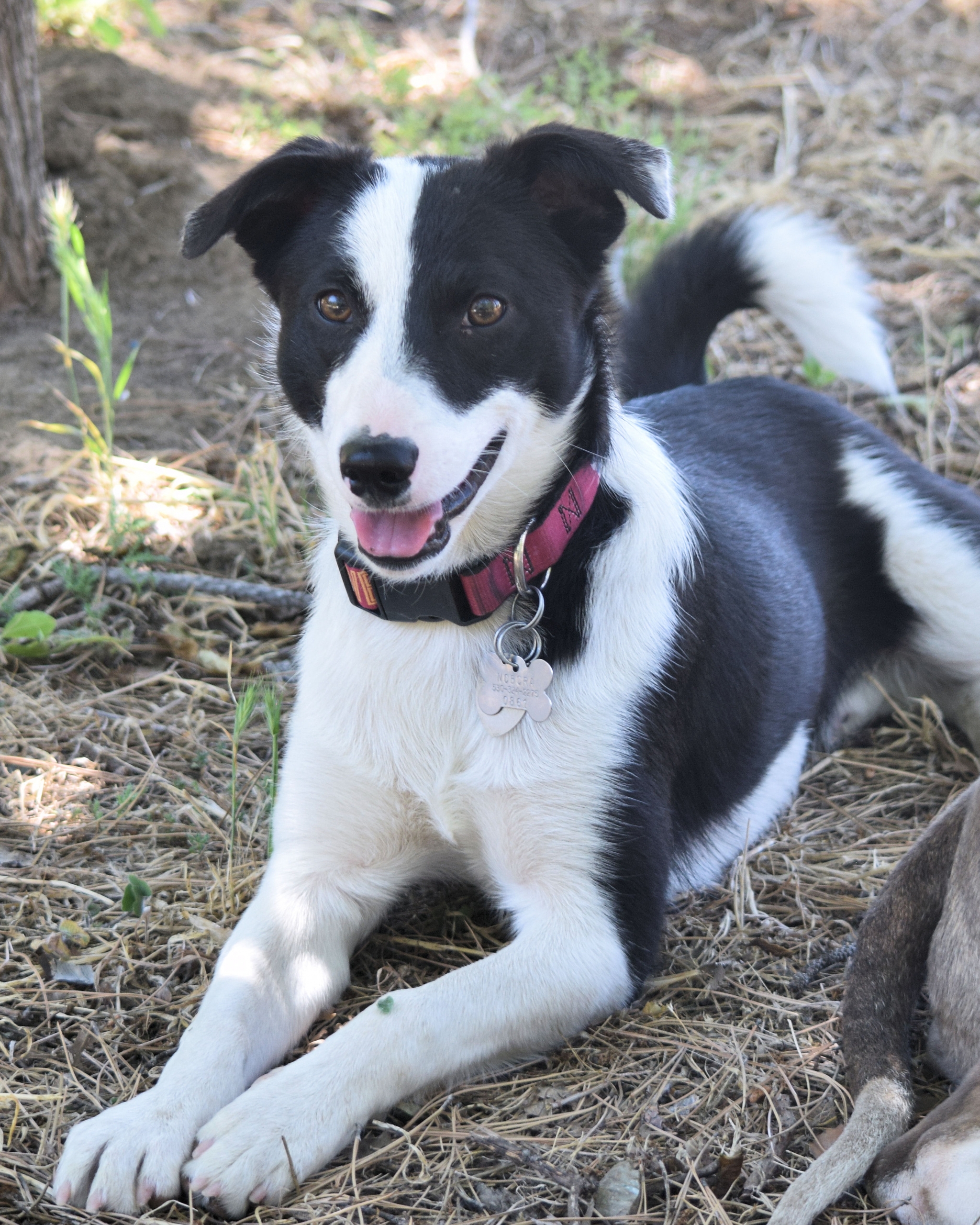 FREDDY is classically marked smooth coat black and white Border collie. He is 5 months of age, 28 lbs and full of spunk. FREDDY is a very active Border collie mouthy youngster who is still learning. And learn he will. He is very smart, knows sit, is doing ok with “crate’ (but he’d much rather be out and about), and has learned to be quiet and still before being fed. In fact that is about the only time he’s still. He does bark some, but mostly when egged on by the other dogs. He is very treat and praise motivated so training should be a blast. An adopter experienced with the personalities of Border collies / herding dogs would be a huge benefit.

FREDDY gets along well with our other dogs. His foster siblings can be out together at any point with no worries, though they all give foster dad the sad eyes when he does not join them. He will run, chase, be chased, and play a little ball. He’s good at running the ball down but not so much bringing it back yet. He much prefers when the ball is still moving. If it stops before he gets it he generally peels off to get the attention of dad or the other dogs. Keep away might be his favorite activity. They each love to grab a ball, stick, or toy and get the others to try to catch them and take it away. It’s all done in good fun.

FREDDY loves people. He longs to spend time with his humans. An activity such as nose work or agility, even for fun, would be something he’d love. It will give him the mental stimulation and physical activity he needs, and the bonding that will occur is something he would relish. Freddy is learning “four on the floor” before he is petted and given attention. He still thinks its ok to (gently) put his mouth on, and jump up on people. Replacing that behavior with proper manners will be key to Freddy being the best he can be. Yoda’s advice to Luke will be paramount to Freddy being the best boy he can be – “You must unlearn what you have learned.”

FREDDY is started on his puppy vaccines, wormed, and microchipped. As a condition of puppy adoption, he will need to be altered when he reaches approximately 6 months (specific time to be determined by your vet). In addition to the adoption fee, puppy adoption requires a $75 spay/neuter deposit. Upon our receiving the spay/neuter certificate from you, the deposit is refunded. If you have an approved Northern California Border Collie Rescue & Adoptions Adoption Application and wish to inquire about FREDDY, please email us at Adoptions@norcalbcrescue.org. If you have an approved adoption application with Border Collie Rescue of Northern California let us know and we will request it be forwarded to us for consideration.

FREDDY is being fostered in Corning in Tehama County, California.

Thank you for considering adoption of your next best friend from NCBCRA. Our Border Collies are waiting to join your family. 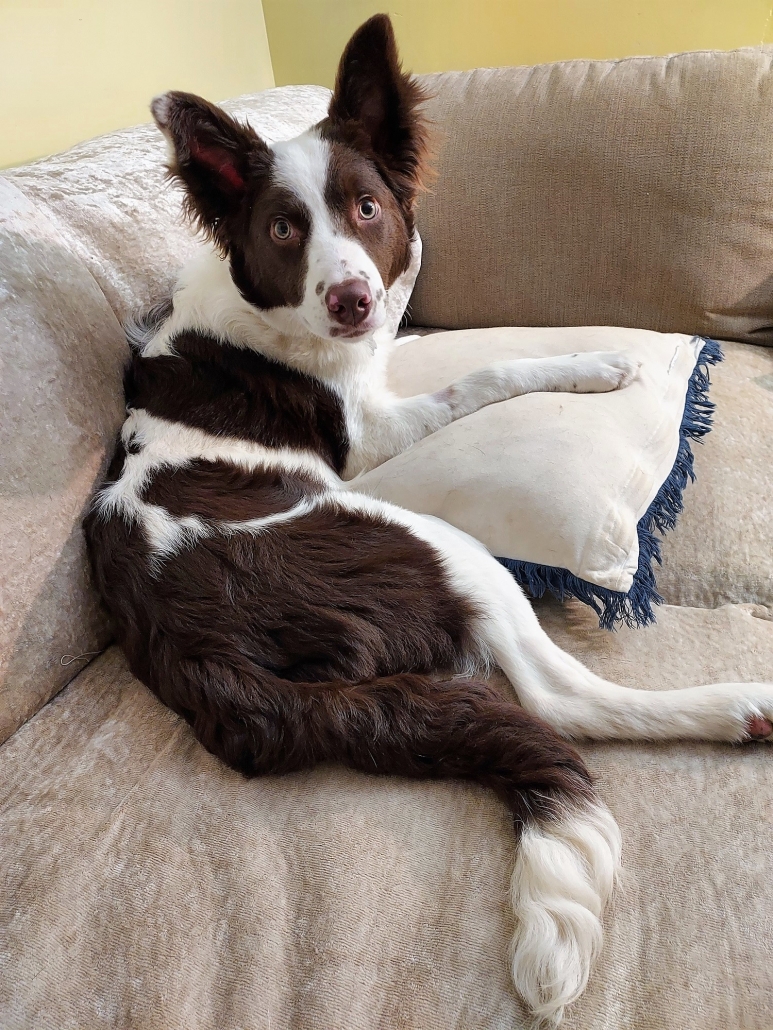 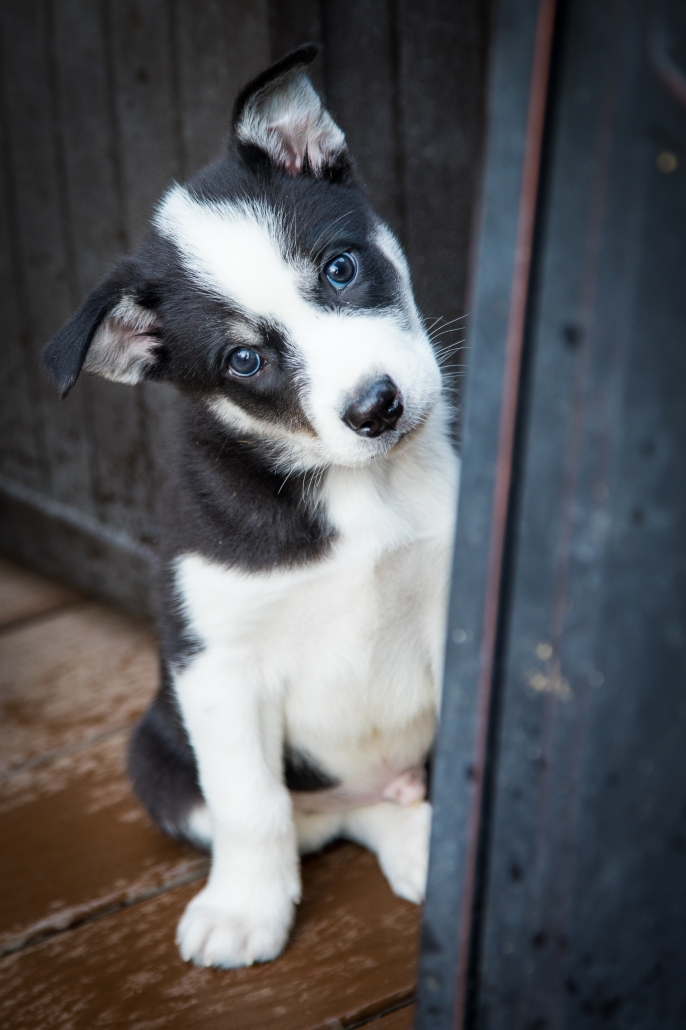 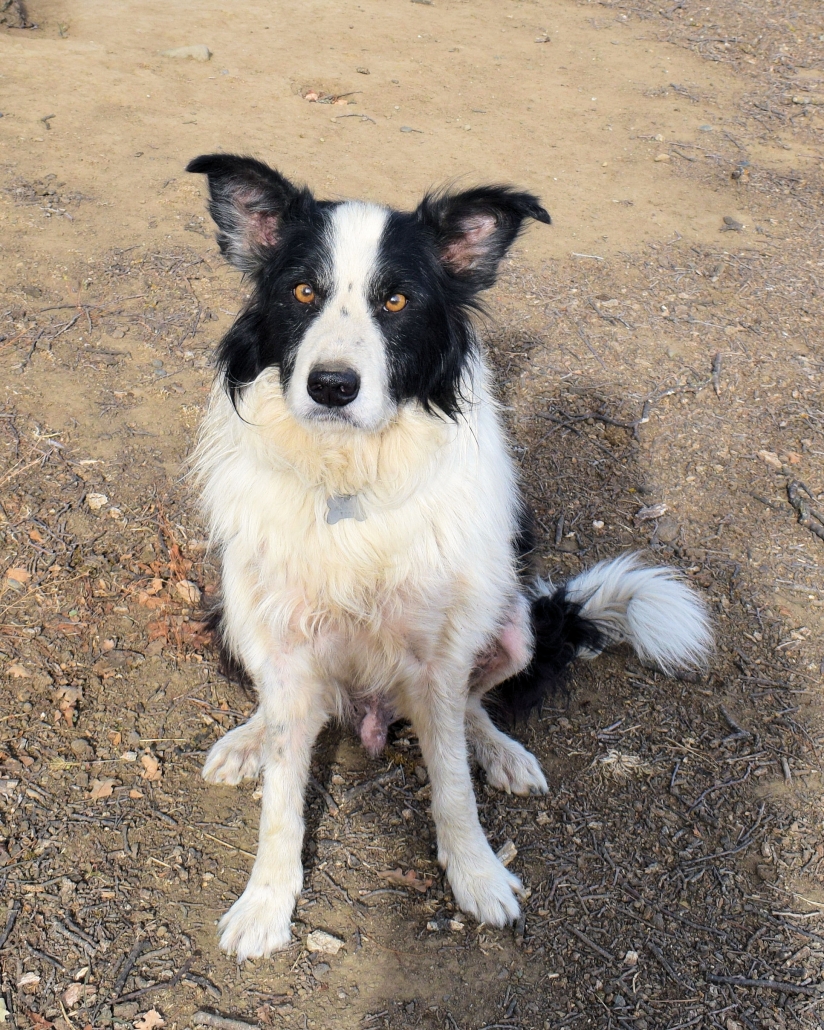 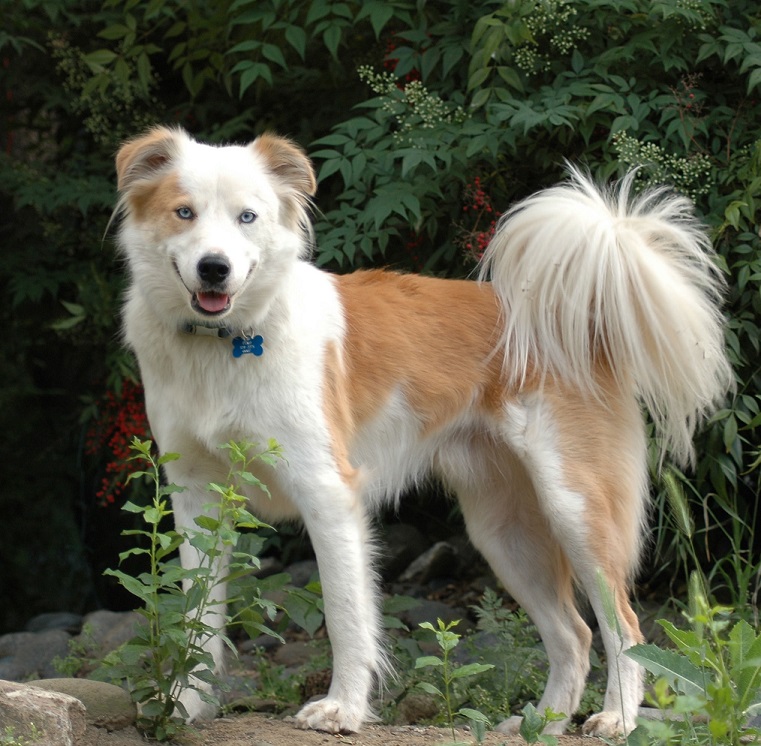