As a courtesy to Rescues & Shelters we will gladly cross post your dogs to get them more exposure. If you see a listing on this page please contact the rescue / shelter directly.

Please email us at OwnerListings@norcalbcrescue.org” for additional information. 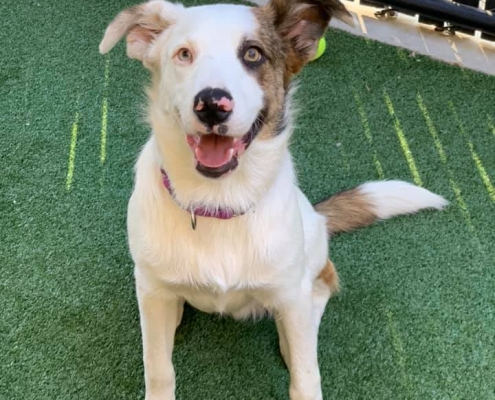 October 23, 2021
Vinny was transferred to Valley Humane on 9/10 from Stockton Animal Services. He had been found stray. Vinny weighs 35.2 pounds and appears to be a merle Border Collie. He is people-oriented and affectionate. Still a puppy, he can be mouthy but is treat-motivated and a trainable dog! Vinny is hearing impaired if not completely deaf but is responding very well to hand signals - he know sit, down, shake and has learned to fetch and drop the ball. He loves toys and will happily wrestle with his favorite large stuffed rooster. Vinny really likes other dogs and plays wonderfully with dogs of similar size and temperament. He does want to play all day so he matches best in households with other active dogs who also want to play. Vinny walks very nicely on leash and as an active breed, will benefit from plenty of regular exercise. In the shelter, Vinny is frustrated about being cooped up and dislikes going back into his kennel room - when frustrated, he does act out and becomes more mouthy. His adopter is recommended to be experienced with larger dogs and be prepared to work with Vinny to deter his jumping.
END_OF_DOCUMENT_TOKEN_TO_BE_REPLACED
https://norcalbcrescue.org/wp-content/uploads/2021/10/Vinny.jpg 960 720 Lewis Beitz https://norcalbcrescue.org/wp-content/uploads/2019/05/ncbcra-logo.png Lewis Beitz2021-10-23 02:01:202021-10-23 02:01:24VINNY 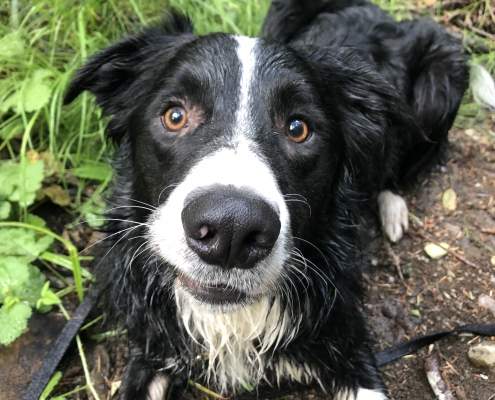 June 25, 2021
If you are interested in NERO please fill out an adoption application here (With ASF – not us) https://www.australianshepherdsfurever.org/adoption... & you can visit his PETFINDER pos here https://www.petfinder.com/dog/nero-52006949/ca/redwood-estates/australian-shepherds-furever-ca2261/   Available for adoption in Los Gatos, CA Not suitable for most households as he is nippy and fearful with strangers and could be a potential bite risk. Though, under the right circumstances and handling, he is wonderful and can go to the right home. He would make a great performance dog. Please read full bio. Nero is a male 1 year old border collie. He is a fun, playful boy who loves to play with his toys and other dog friends in the house!!
END_OF_DOCUMENT_TOKEN_TO_BE_REPLACED
https://norcalbcrescue.org/wp-content/uploads/2021/06/Nero-scaled.jpeg 2560 1920 Lewis Beitz https://norcalbcrescue.org/wp-content/uploads/2019/05/ncbcra-logo.png Lewis Beitz2021-06-25 02:27:202021-06-25 02:37:14NERO – ASF RESCUE (Courtesy Crosspost) 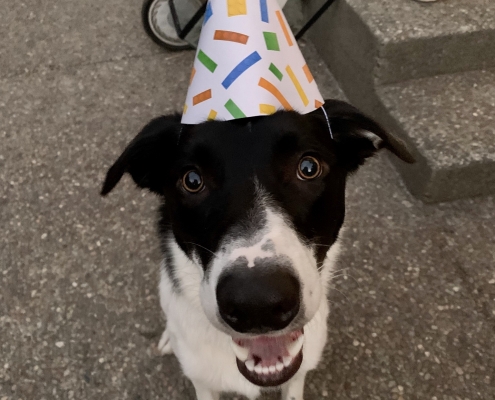 May 18, 2021
For more information, please call or text his foster Nicole at (707) 953-4623 Meet Beau! This fun loving guy would be the perfect working or sports dog. Beau is a 1.5 year old neutered male border collie with a very high ball drive and drive to train. Beau has been living with a certified professional dog trainer and behavior consultant for almost a year now and has a good foundation training in obedience, rally, scent work (birch, anise and clove), agility and tricks. With the right partner beau could excel in a competition or working home. Beau is great with other dogs and has never had any issues when playing with other dogs and has lived with multiple dogs in the house.
END_OF_DOCUMENT_TOKEN_TO_BE_REPLACED
https://norcalbcrescue.org/wp-content/uploads/2021/05/Beau-Birthday-Hat.jpeg 2048 1536 Lewis Beitz https://norcalbcrescue.org/wp-content/uploads/2019/05/ncbcra-logo.png Lewis Beitz2021-05-18 21:30:552021-05-19 02:19:37BEAU